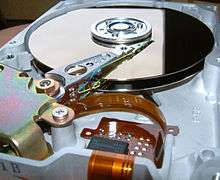 Digital media are any media that are encoded in a machine-readable format. Digital media can be created, viewed, distributed, modified and preserved on computers. Computer programs and software; digital imagery, digital video; video games; web pages and websites, including social media; data and databases; digital audio, such as mp3s; and e-books are examples of digital media. Digital media are frequently contrasted with print media, such as printed books, newspapers and magazines, and other traditional or analog media, such as pictures, film or audio tape.

Combined with the Internet and personal computing, digital media has caused disruption in publishing, journalism, entertainment, education, commerce and politics. Digital media has also posed new challenges to copyright and intellectual property laws, fostering an open content movement in which content creators voluntarily give up some or all of their legal rights to their work. The ubiquity of digital media and its effects on society suggest that we are at the start of a new era in industrial history, called the Information Age, perhaps leading to a paperless society in which all media are produced and consumed on computers. However, challenges to a digital transition remain, including outdated copyright laws, censorship, the digital divide, and the specter of a digital dark age, in which older media becomes inaccessible to new or upgraded information systems. Digital media has a significant, wide-ranging and complex impact on society and culture.